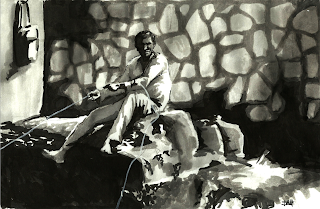 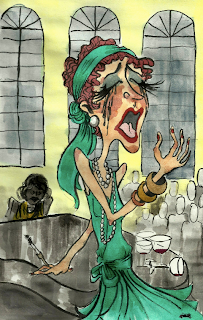 "She had drunk a quantity of champagne, and during the course of her song she had decided, ineptly, that everything was very, very sad - she was not only singing, she was weeping too. Whenever there was a pause in the song she filled it with gasping, broken sobs, and then took up the lyric in a quavering soprano. The tears coursed down her cheeks - not freely, however  for when they came into contact with her heavily beaded eyelashes they assumed an inky color, and pursued the rest of their way in slow black rivulets."
The Great Gatsby
F. Scott Fitzgerald
Posted by LillMartinezArt at 1:33:00 PM
Labels: illustration, ink, the great gatsby, watercolors
Newer Posts Older Posts Home
Subscribe to: Posts (Atom)